We are open for take-out and delivery! 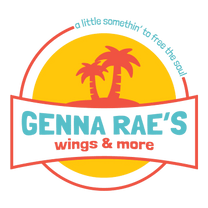 Genn opened Genna Rae's Wings and More in 2016 as a way to indulge his passion for food, and to share his hometown cooking with the community. Originally from the Virgin Islands, Genn came to the United States to pursue a career as an auto mechanic. However, once people began trying his famous fresh cooked wings, he knew starting his own restaurant was his true calling.

While Genna Rae's currently has one location in Five Points, Genn's dream is to open multiple locations to feed as much of the community, with fresh cooked soul food, as possible. He hopes to one day have a legacy of locations and sauces to pass on to his five children.

Genn and his team have hand crafted every item on the menu in his very own kitchen, with inspiration from his Caribbean heritage. His incredible team hopes to introduce dishes paying homage to each of the islands in Trinidad and Tobago in the near future. Stay tuned!